Meat free “chorizo” with red pepper, onion and garlic, in a rich, mildly spiced tomato sauce. I chose to serve this with penne, but you could use any pasta you like, spaghetti would work really well too. In regards to the “chorizo” I used Sainsbury’s Plant Pioneers. You can also get Wicked Kitchen vegan chorizo style sausages from Tesco, and Plant Kitchen chorizo puppies from M&S or online from Ocado. Just click or tap the underlined links to check them out 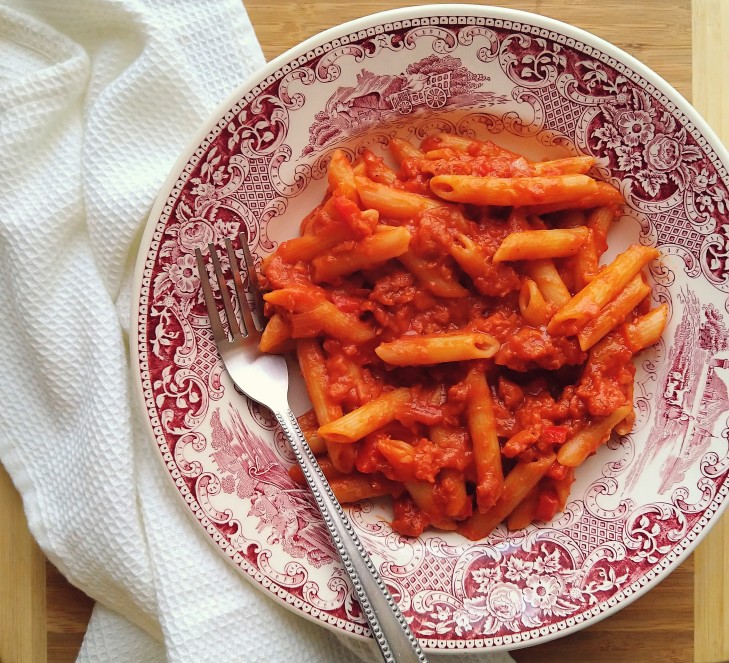 Recipe - Creamy tomato & "beef" fusilli 🍝
My order from @jeavonstoffee came, & the dynamite bar is so good! 🍫
New vegan bacon by @richmond_foods 🥓
Vegan chicken & ham cheesy toastie 🥪
There were 6 dinosaurs, and a severed dinosaur head in this box, is this like a vegan version of the horse's head in The Godfather 😂
Reviews of some new things I bought from Tesco;
New Recipe - Vegan "Beef" & Broccoli Stir Fry 🥦
More pizza, this times it's Father Johnathan's 🍕 The vegan works stuffed crust, with vegan nuggets & cherry Pepsi Max. I love their nuggets, the this pizza is my favourite that they do